Raising Up Missionaries from Sydney University

Like so many, it was while studying that James Fraser was made aware of the nature, needs, and challenge of Christian service abroad by a pamphlet which ‘struck at the very roots of his assumptions.’ As convicting now as it was then in 1906, the pamphlet reads: ‘If our Master returned today to find millions of people unevangelised, and looked, as of course He would look, to us for an explanation, I cannot imagine what explanation we should have to give. Of one thing I am certain – that most of the excuses we are accustomed to make with such good conscience now, we shall be wholly ashamed of then.’ Less than 50 years later, this challenge had affected not only the life of James, who left engineering for missionary service in southwest China, but also the eternities of countless Lisu. By 1950, as missionaries were withdrawing from Lisu regions, over 800 Lisu gathered to farewell them by singing salvation songs in praise to Jesus Christ.

Although one wonderful story does not make for a good statistic, the impact of student work on global missions is well attested. In the case of our own history, Meredith Lake writes that the origins of the Sydney University Evangelical Union were ‘marked by missionary enthusiasm.’ An enthusiasm which would be written into our three objects, focusing the EU upon the aims of ‘evangelism, teaching, and a missionary perspective’. The third object would seek to ensure that Christians in the University are made aware of the nature, needs, and challenge of Christian service at home and abroad. As Rowan Kemp puts it, ‘under God’s hand, the EU has always had a heart to share its gospel riches with the rest of the world.’

Upon his appointment, Rowan brought to his very first staff meeting two maps—a map of Australia and a map of the world. ‘Because that’s our vision. To see EU people engaged in Christian service right across the world. A global vision.’

By God’s grace, our missionary enthusiasm endures. Upon his appointment, Rowan brought to his very first staff meeting two maps—a map of Australia and a map of the world. ‘Because that’s our vision. To see EU people engaged in Christian service right across the world. A global vision.’ Having grown to become one of the largest student ministries in the world, we are aware that we are incredibly gospel rich. And many EU students have been grasped by the vision of sharing these riches with the gospel poor, especially the less reached and less resourced (LRLR). This year alone, standing at AnCon alongside graduate missionaries who signed the first LRLR pledge in 2010, around 130 students pledged themselves to doing something to serve the LRLR in the next 12 months and to prayerfully consider going to serve the LRLR throughout Sydney, Australia, or the World.

It’s such a privilege to serve alongside students and staff as we promote our global vision to share the gospel riches our Lord has given us with the LRLR. As students see in Scripture, some for the first time, the glorious international scope of God’s heart, mind, and strength poured out for all nations; as Howies opt-in for mission discussions and prayer at the early hour of 8am every Monday; as graduates return to consider their Next Steps; and as we all pray for the unevangelised and gospel poor across Australia and the world—I look forward to what God might do not only in our lives and the lives of our students, but to the eternities of those who are less reached and less resourced across the world. 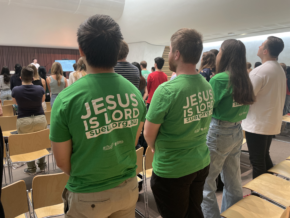